Mom, dad, I want to study in Ukraine

Not only Ukrainian young people are going to get higher education abroad, but also foreign student are storming our universities. Now in Ukrainian universities more than 60,000 foreign students get their diploma. Their number is growing from year to year - over the past five years it has increased by one and a half time. Most foreigners choose medicine (16,062 students get a diploma of a doctor) and technical specialties (13,970 students), then the humanities and economics are followed.

An interesting fact: they come to study not only from the third world countries or neighboring countries, but also from prosperous European countries (about 5% of such students). So why are more and more foreigners saying: "I want to study in Ukraine!"

Today, the Law "On Higher Education" is already 3 years old, and people still do not know that the baccalaureate is officially recognized as a higher education. So now, in Ukraine there are two degrees: bachelor and master.

Bachelor in Ukraine are ready-made specialists who possess the knowledge necessary for further work in their specialty.

Master in Ukraine is required for a person to have the right to hold management positions. For people with a Master’s degree, professional growth will be rapid even with high competition. The magistracy provides guarantees for job placement on a specialist in analytical and research centers, large corporations.

University education in Ukraine - the path to success

Ukraine is in some ways unique. According to the World Economic Forum, Ukraine ranks 10–12th in the world in terms of higher education enrollment. It is received by 79% of people aged 20 to 26 years. Therefore, many students tend to teaching in Ukrainian universities.

According to the education statistic in Ukraine, the State Statistics Service reports that in the 2017–20187 academic year, there were 1.586 million students in Ukraine. 465,283 applicants were gided to the full-time form, of which 237,625 were for the budget and 227,654 for the contract at the Ukrainian establishments.

Many foreign students note that by enrolling in Ukrainian universities they receive:

How much it costs to study in Ukraine?

Of course, no budget places will be enough and you will have to pay a round semester to get a coveted qualification about graduating from a prestigious university.

However, what amounts are in question this year? Let's understand this question. 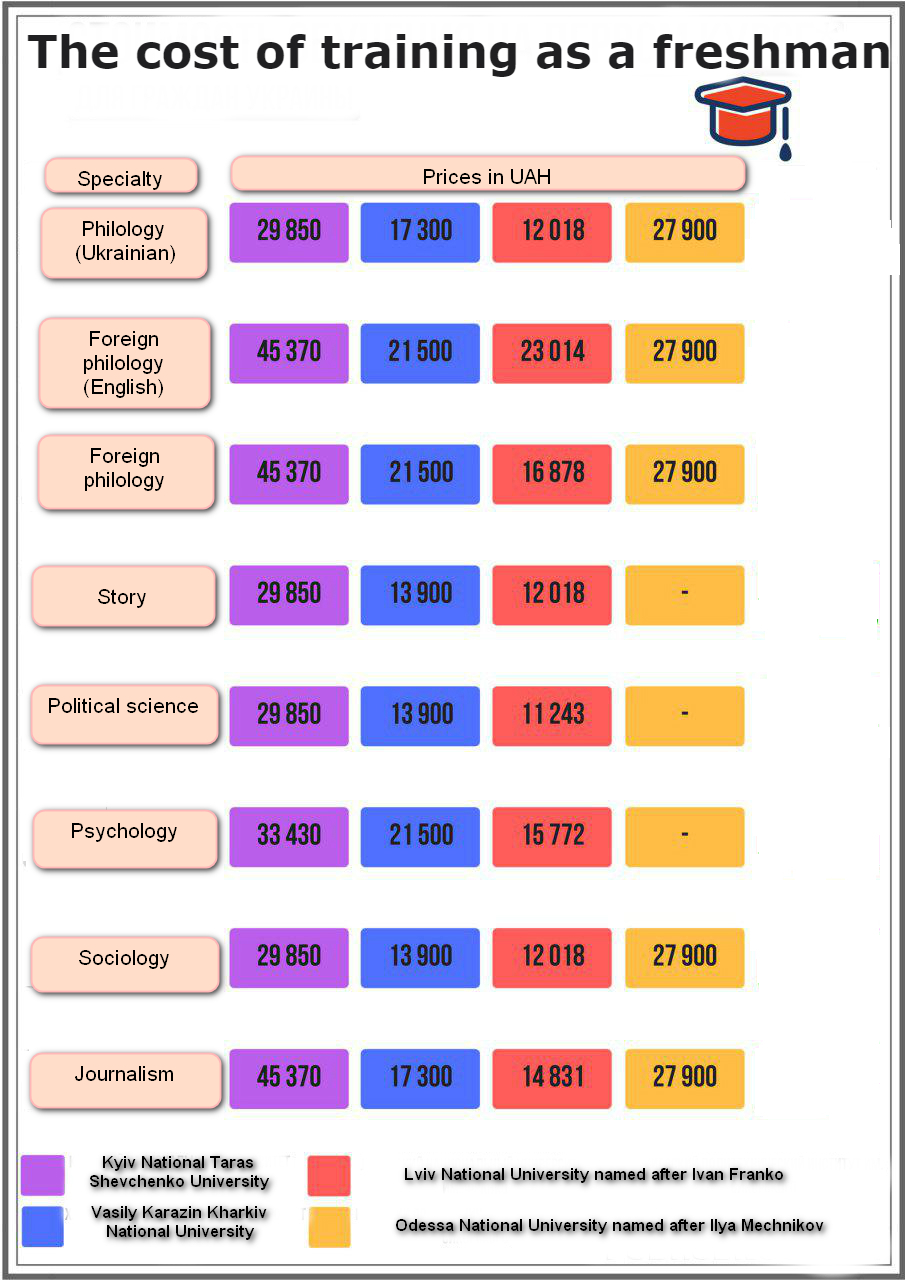 As we can see, the highest prices in Kyiv - in the perspective university named after Taras Shevchenko for finance or legal license will have to pay 52,530 hryvnia by academic term, while in Kharkov, Lviv or Odessa this amount is almost three times less.

University education in Ukraine is much cheaper compared to foreign institutes. This is one of the most important reasons, why many students want to study in this country.

Such sciences as chemistry, biology and physics remain in demand in Ukraine among foreign students, the same situation in the field of social sciences.

Despite the rapid development of the sphere of IT-technologies, computer science comes to the price of economic and legal specialties - the cost of education at the bachelor reaches 33,430 hryvnia.

If you look at the quality, priority indicators, then in engineering education, Ukraine is in the top ten, and in business education, at the end of the first hundred. There are 288 universities in Ukraine. According to the results of 2016-2017, the Kharkiv National University named after Vasyl Karazin took the 401th place, Kiev National University named after Shevchenko took the 411th place.

According to the education law in Ukraine, which actually reduced training time, this is very little money stands in the way of international skill knowledge.

However, do not forget that training is not only a fun pastime with fellow students, but also daily labor, reward for which will be good marks on the examination tests.

Higher education is certainly good to get! According to students, Ukrainian universities are much better than many foreign ones.

All News
Send a message
×

Be aware of the latest updates